The Maçanita winery is located on the right bank of the Douro River, in the heart of the Douro region, 20 mins from Pinhão in the sub-region of Cima Corgo.

A boutique winery which produces around 80,000 bottles of red, white and rosé wines per year. More recently it has embarked into the world of Vinho do Porto production which, for the time being, is a very well-kept secret.

At the Maçanita Winery, the winemaking process is non-intrusive, and the aim is to bring the Douro terroir to the bottle. With a very diverse set of wines, the Maçanita winery produces monovarietal wines, such as the 100% Touriga Nacional Cima Corgo and the 100% Touriga Nacional Letra A, two wines, the same grape variety at different altitudes, and multi-variety wines from old vineyards at high-altitude on granite, to the oxidative Malvasia fina from the Baixo Corgo and the extreme 100% Arinto with its pulsating acidity. Each one of these wines is the result of a restless exploration by the Maçanita siblings who, vineyard by vineyard, seek to transmit a distinct personality from each corner of the Douro Valley. 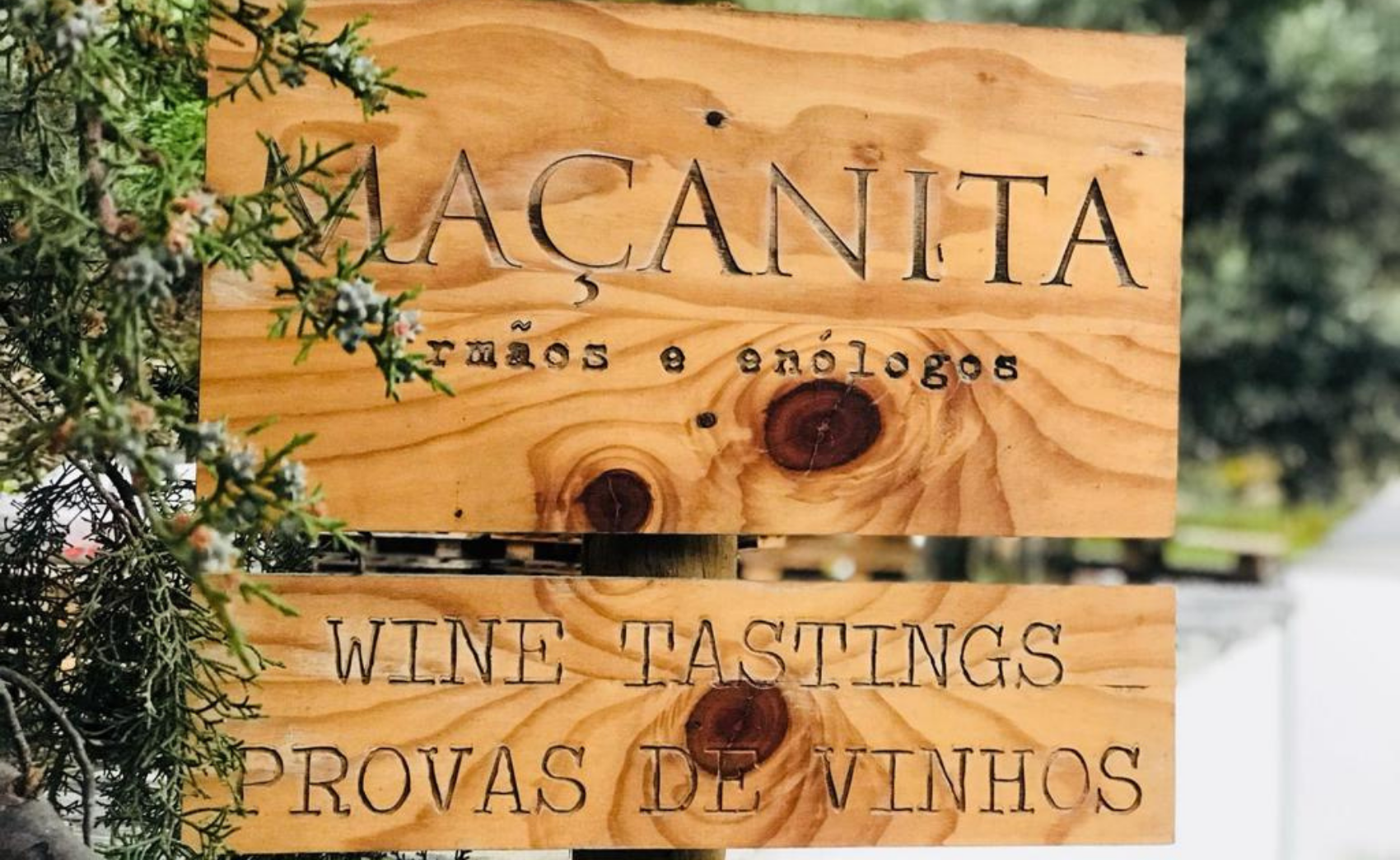 Maçanita Winemaking has a minimalist, non-interventionist approach. The magic is in the vineyards and the places where the grapes come from, the siblings have a philosophy that defies convention. Smashing stereotypes and searching for the small treasures of the Douro with an open mind.

The white wines, Maçanita Branco, Gouveio by Joaninha and Folgasão from both siblings, are Joana Maçanita's main focus at the beginning of each harvest. Her winemaking always seeks to respect the fruit and purity of the grapes. The white grapes are pressed whole bunch without de-stemming, then gently pressed in a pneumatic press, without adding sulphur.

The fermentation temperatures are low, around 12 to 14ºC, trying to keep all the freshness and minerality of the Baixo Corgo vines from which these grapes come from. The wine ages in stainless steel on its primary lees until the day of bottling.

In making white wines from old vines, there are many varieties. We count about 17 different ones in each of our wines from ancient vineyards, as in the Olgas Branco and Os Canivéis Branco. Grape varieties with very different maturation times, such as the viosinho, that matures much earlier than the arinto variety. However, they are all in the same vineyard mixed together.

This mix of grape varieties brings a great richness of colour, texture, and acidity to the must and, of course, a very different approach to oenology than that used in the production of single variety wines. There are so-called oxidative grape varieties that have a very expressive fruit aroma in the first months of life, but which eventually fade away.

We have other varieties in the old vineyards that are very aromatic, more reductive, with a much longer aroma life span. All these factors are considered when the oenology at the Maçanita winery brings the most faithful form of that over 120 years old small parcel of vineyard to the bottle. The white grapes from ancient vineyards or old vines follow older oenology techniques, they are pressed whole bunch into neutral barrels (barrels used to make more than 7 wine) and ferment at free temperature, which generally reaches between 21º and 24ºC.

The wines are aged on primary lees for 12 to 15 months in neutral barrels, then filtered and bottled.

Our Touriga Nacional em Rosé is one of the great oenology discoveries at the Maçanita Winery. Created by chance, it turned out to be a prime wine in our portfolio. Initially, the Rose produced at the Maçanita Winery was only a by-product from the saignée method on red grapes, to concentrate the red wines in years of heavy rain during harvest time. In 2015, at the Maçanita winery, only the juice of the Touriga Nacional grape variety underwent saignée. You could taste the freshness of the grapes straight from the vineyards. Today, the oenology process used to produce Maçanita Rose follows the same method of “saignée” of red grapes. And adds the grapes of Touriga Nacional from Baixo Corgo at 700 metres altitude, which are pressed whole bunch, direct press and then fermented cold in stainless steel tanks. 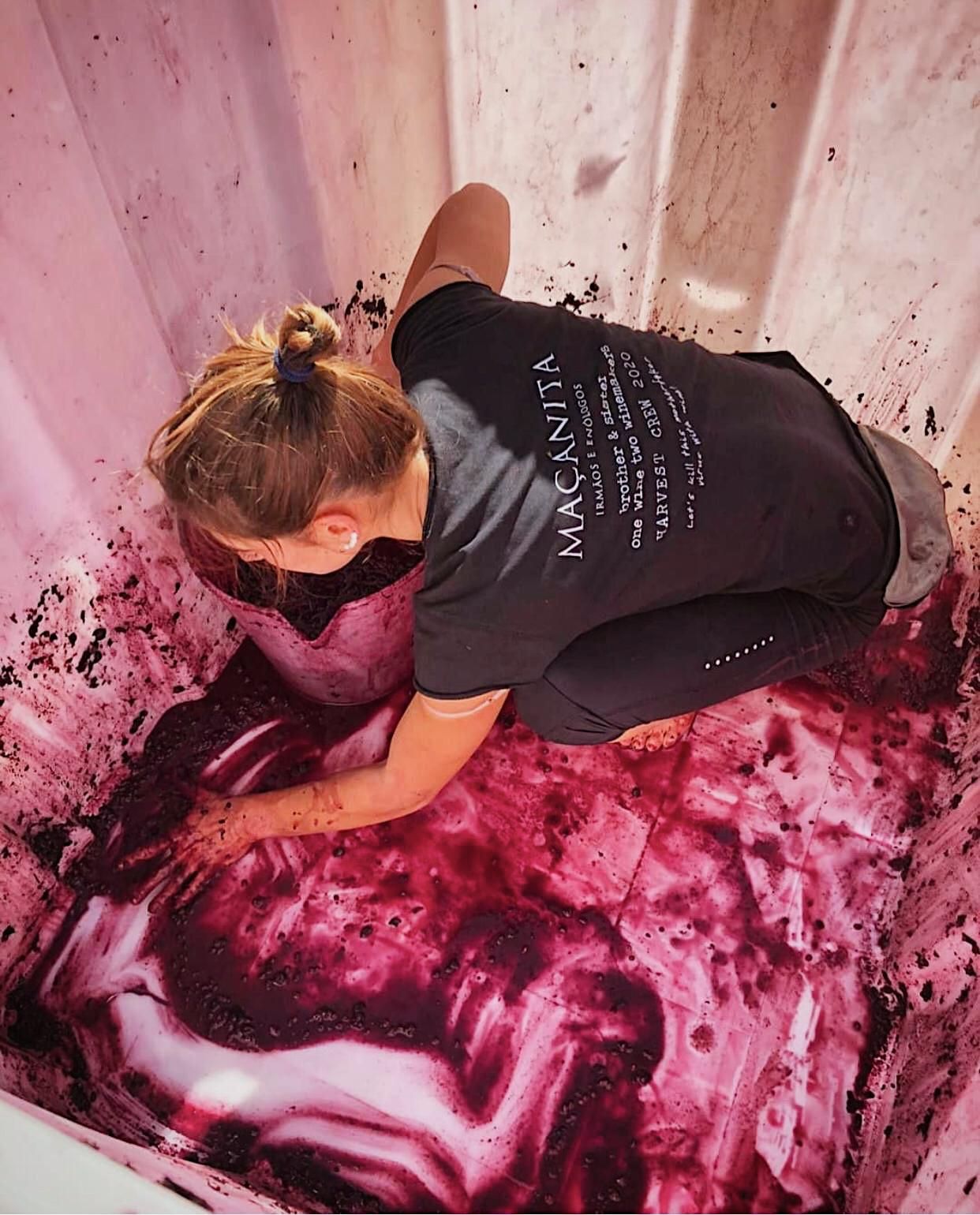 In the Maçanita winery, the red grapes are always moved without pumps. The use of mass pumps is forbidden, and the grapes are carried inside the winery. The harvest is made for 20 kg boxes and the grapes are selected on a sorting table. At the Maçanita Winery, everything that shouldn't be there is removed, such as dry leaves, green leaves, or defective grapes. Then, through gravity, the grapes enter a de-stemmer that simply bursts the grape berry, so that the juice slowly exits throughout the three stages of alcoholic fermentation.

The start of skin contact occurs from the first minute that the grapes enter the vat. At low temperature without yeast inoculation the must starts the cold soaking. Then, spontaneous alcoholic fermentation begins, and the temperature rises to 27ºC, where the winery workers perform daily pump-overs to keep the must in contact with the skins. Foot treading is not used in cellar, as the extraction process is very crude and aggressive, we have change to hand treading.

The oenology for red wines is soft and slow to perfectly combine the colour (antonyms) texture (tannins) and aroma components of the wine. After the post-fermentative maceration or "Cuvaison”, which can last about 20 days, the fermented masses are pressed, and the press wine is kept separately from the free run wine. Two wines with a very distinct profile. Depending on the wine, it may or may not mature in French oak barrels or in stainless steel tanks. Only our "É Sousão Será Vinhão" is 100% matured in new French oak barrels.

Maturing can be from 12 to 18 months, depending on the wine and the year.

As in the ancestral whites, the old vines or ancestral vineyards the red grapes are of various varieties and personalities. The vast mixture of about 15 different red grape varieties on the same 100-year-old plot greatly alters the profile of each variety on its own. Vineyards composed by the varieties, Bastardo, Donzelinho Preto, Chancelar, Touriga Franca, Sousão, Trincadeira Preta, Mourisco, Tinta Carvalha, Touriga Nacional, Tinta Roriz, Tinto Cão, and others, are of a remarkable diversity of colours, textures and maturations.

The winemaking at the Maçanita Winery in the old red vines seeks to preserve the authenticity of this genetic variety, maintaining the tradition of the old with the vision of modern times. The grapes are harvested in 20 kg boxes, then sorted. Each of the small parcels is fermented separately. With the vision of keeping all the DNA of each plot, the grapes are placed in small vats of 500 to 1000 kg, part de-stemmed and part whole bunch.

Here two fermentations take place inside the “lagarete” (small vat): alcoholic fermentation inside the berry and alcoholic fermentation outside the berry. The grapes are manually tread daily so as not to destroy the skins and not to force the rough extraction of colour and tannins. The temperatures are uncontrolled and the wine stays in cuvaison for about 30 to 45 days. After pressing, the wine is aged for 12 to 18 months in neutral French oak barrels (used barrels, aged about 7 years). 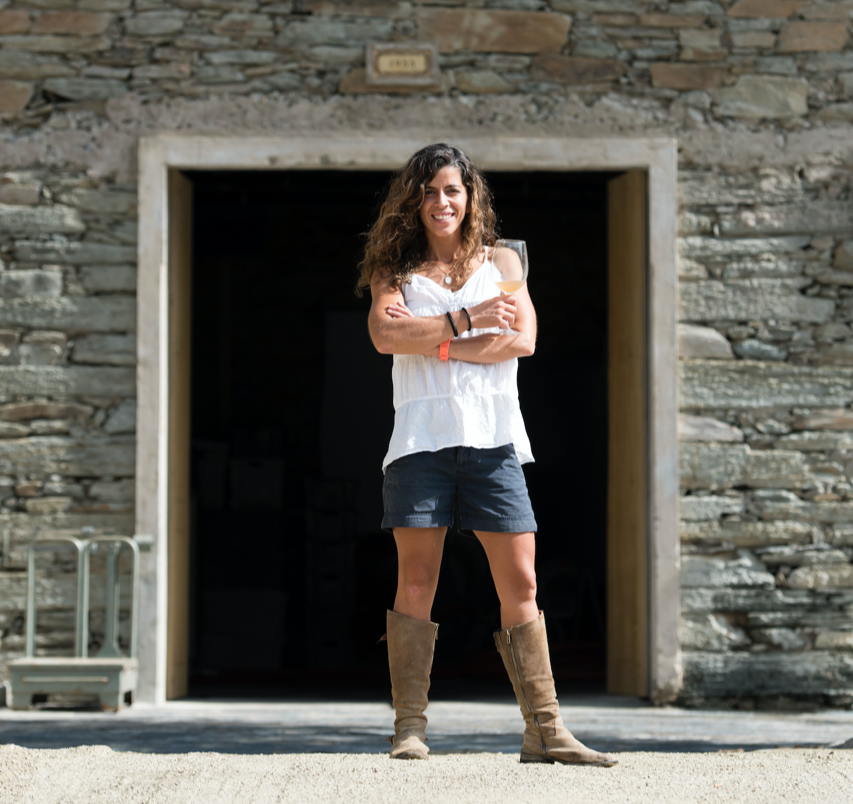 Located in the Douro region, the Maçanita Vines are located in all its three sub-regions. Each of these sub-regions has its own characteristics. Depending on altitude and distance from the Douro River, we can find schist as well as granite soils. Maçanita's vines are found at different altitudes in different sub-regions.

The vines of Baixo Corgo are generally cooler, as this sub-region is closer to the coast and has greater Atlantic influence. The Maçanita vines in Baixo Corgo are located between 550 and 700 metres above sea level on schist soils. The grape varieties planted are Viosinho, Gouveio, Malvasia Fina, Arinto, and Folgasão. These are vines that convey a lot of freshness and minerality given their location and altitude.

The Cima Corgo vineyards are more temperate, situated in the heart of the Douro, where the Atlantic influence is balanced. Because Portugal is a country with a long coastline, the influences from the Atlantic and the continent are felt strongly throughout the Douro region, causing temperatures to rise from the Baixo Corgo to the Douro Superior. In Cima Corgo, the vineyards of Maçanita Vinhos are located at different altitudes and in different types of soil.

The Sousão and Touriga Nacional Cima Corgo vineyards are located at an altitude of 550 metres, on yellow schist soils facing the Douro River, with milder temperatures, further aided by the altitude. This produces wines of great elegance and balance, with fresh fruit notes and very soft tannins.

Another of Maçanita Vines is located at an altitude of 170 metres in blueschist soils. Here, we have the vineyard from which we harvest the Touriga Nacional Letra A.

Letra A is a classification that appeared after the creation of the House of  Douro (an alliance between winegrowers in the Douro region) in the mid-20th Century. This classification was intended to classify and reward each farmer on the practices of the land and viticulture. Other aspects taken into account are the location of the vines on the Douro landscape, altitude, type of soil, planting density, microclimate, etc. The vines that gathered the best of these parameters and that are said to be best performing for the production of Port wine grapes were awarded the classification Letra A. The vines that gathered the least advantageous conditions for producing Port wine were given the classification Letra F.

Also, in Cima Corgo, at an altitude of 550 metres, in an area of transition from schist to granite, the old Maçanita vines are grown (an ancient vine stock). Located in the less noble zone of the Douro classification, the Letra F, these are the vineyards that most impressed the Maçanita siblings. With a genetic and social history of around 150 years, grapes are produced with a very specific character, with non-interventionist viticulture, without herbicides and according to the rules of integrated production. The recovery of these vineyards is one of the great aims of Maçanita Vinhos, to give life to the ancient vines of the Douro Letra F.

The Douro Superior, known for its warmer, more mainland climate, is the sub-region of the Douro closest to the Spanish border and therefore the sub-region with the least Atlantic influence. The vineyards of the wine "Quanto mais Arinto mais Gosto de Ti" can be found in the Murça area, at an altitude of 540 metres, on schist soils in the Douro Superior. A vineyard that despite being in the hottest sub-region of the Douro, has deep soils, with access to water, at altitude, this unique feature proves a later ripening of the grapes, with lower sugar levels and consequently high acidity and freshness. 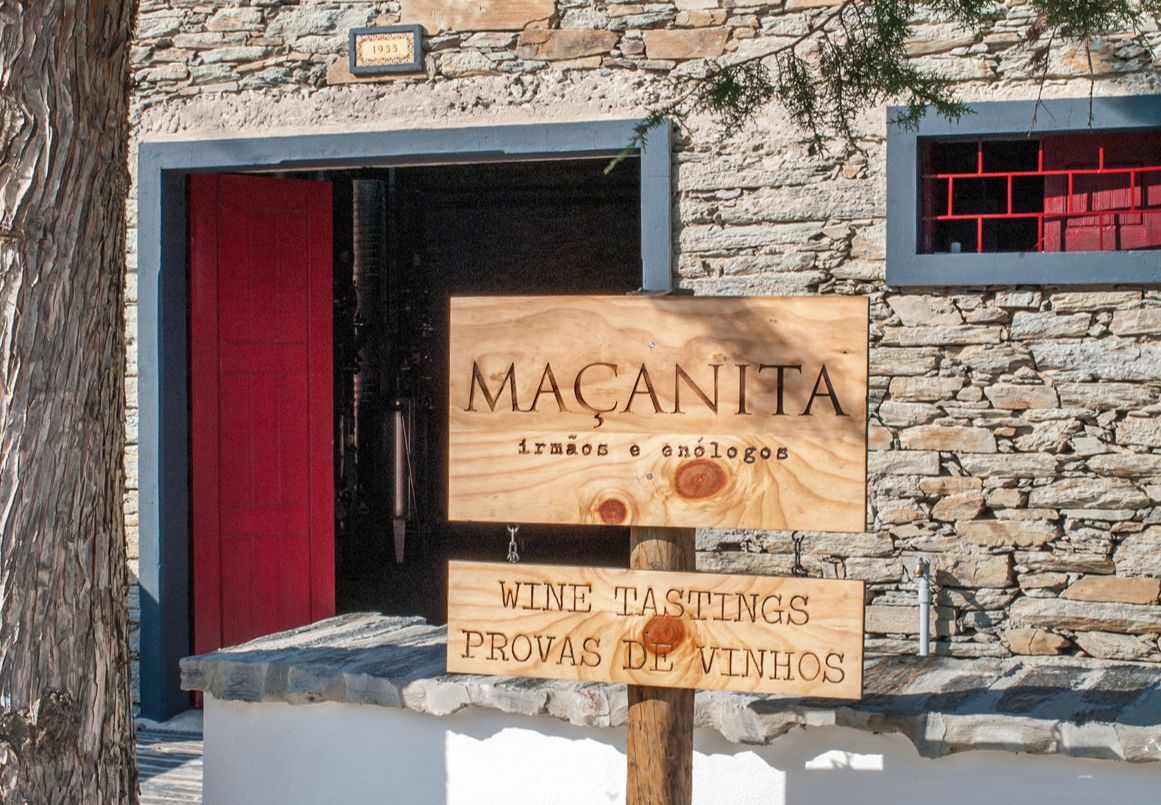