The Fitapreta team was first formed by the young Portuguese winemaker António Maçanita and the experienced English consultant and viticulturist David Booth with the launch of their first wine, Preta, in 2004. In 2008, the team is strengthened with Sandra Sárria who, in 2015, was invited by António Maçanita to embrace the Fitapreta project, as a partner.

Currently, the Fitapreta Vinhos team is led by the two winemakers António and Sandra. Together they form a passionate team dedicated to wine, to the recovery of grape varieties and to an old way of making wine.

Fitapreta was awarded Producer of the Year 2020 by Revista de Vinhos, an award for the whole team that reflects their spirit of reinvention and determination, always present since the beginning. 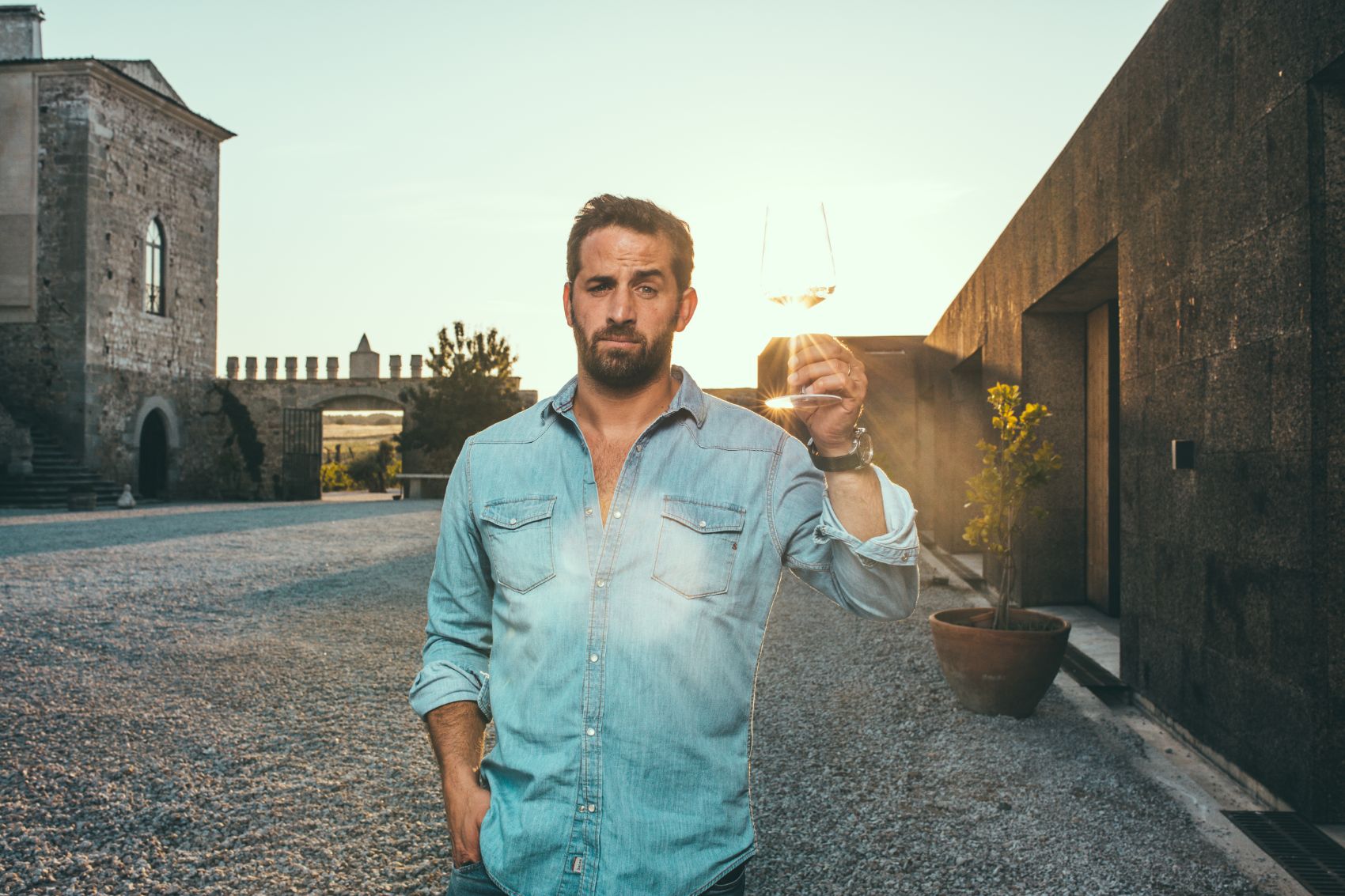 António Maçanita made a mistake when he applied to college and was placed on the Agronomy course, after which he graduated from the Instituto Superior de Agronomia in Oenology. He tried to recover a vineyard in the Azores in 2000, but a storm destroyed it and he went on a few internships around the world: in the United States, Australia and France.

António Maçanita's first wine production project was in Alentejo in 2004, when he created Fitapreta Vinhos with winemaker David Booth, a consultant and friend who embarked on this adventure with António.

Already revealing his taste for challenges and his irreverence, António Maçanita launched Preta, his first wine with David Booth, a success that was only the beginning of his "journey" through the region. An admirer of the history of the regions and mixing the past with the present in a bottle of wine, António pioneered the production of white wine with red grapes in 2008 in Alentejo. In 2010, he sparked the production of talha wine in Portugal, with the launch of his Branco de Talha. All under the umbrella of Fitapreta, the first of four companies he created over the years, in response to challenges he was facing.

After a few years in Alentejo, still without a house or vineyard of its own, it was finally in 2016 that Fitapreta moved to the Paço do Morgado de Oliveira. The restoration of this 14th century Paço with an undeniable historical value began. Recovering another Alentejo that was lost in history, António Maçanita launched wines in 2018 from the Chão dos Eremitas vineyard, a vineyard with old Alentejo grape varieties.

At Fitapreta Vinhos, António continues to reclaim history and agitate the status quo, with his explorative, restless and provocative character. 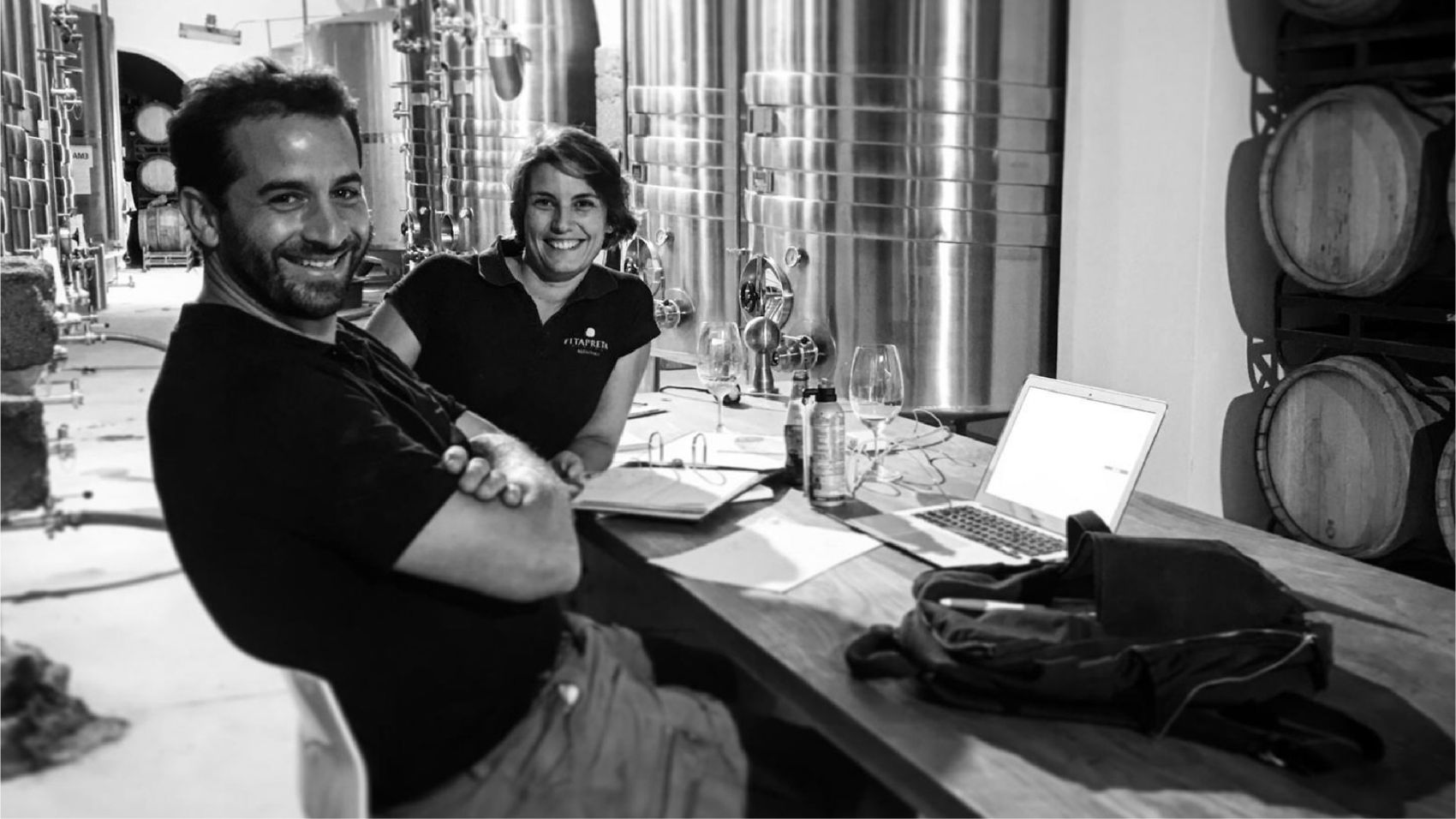 Sandra Sárria studied at the Instituto Superior de Agronomia, where she graduated in Oenology and was awarded by the same institute the "Best Young Oenologist" prize in 2007, for her end of course work Comparison of Methods of Extraction of Phenolic Compounds. Sandra Sárria was a trainee at the José Maria da Fonseca winery, one of the largest wine companies in Portugal, and traveled to Chile in 2007 to learn more at the prestigious winery, Viñas Casas Del Bosque, in Casablanca.

The winemaker joined, in 2008, the grape harvest of a wine consulting client of the company Wine ID, where she met António Maçanita. Later, she was invited to join the commercial department of Fitapreta Vinhos.

Sandra Sárria saw Fitapreta Vinhos grow from a very early stage and supported António Maçanita and David Booth, taking on commercial, manager, administrative and accounting functions, having a problem-solving spirit and the ability to adapt to any area.

In 2015, she was invited to be António Maçanita's partner and to embrace the Fitapreta Vinhos project as her own. Sandra Sárria is currently Production Director of Fitapreta Winery, being responsible for the production and maintenance of the spaces and being in charge of a permanent team of 19 people. She is characterized by being a very focused person with very clear objectives. Everything she does in life is done with great passion and always with a big smile! 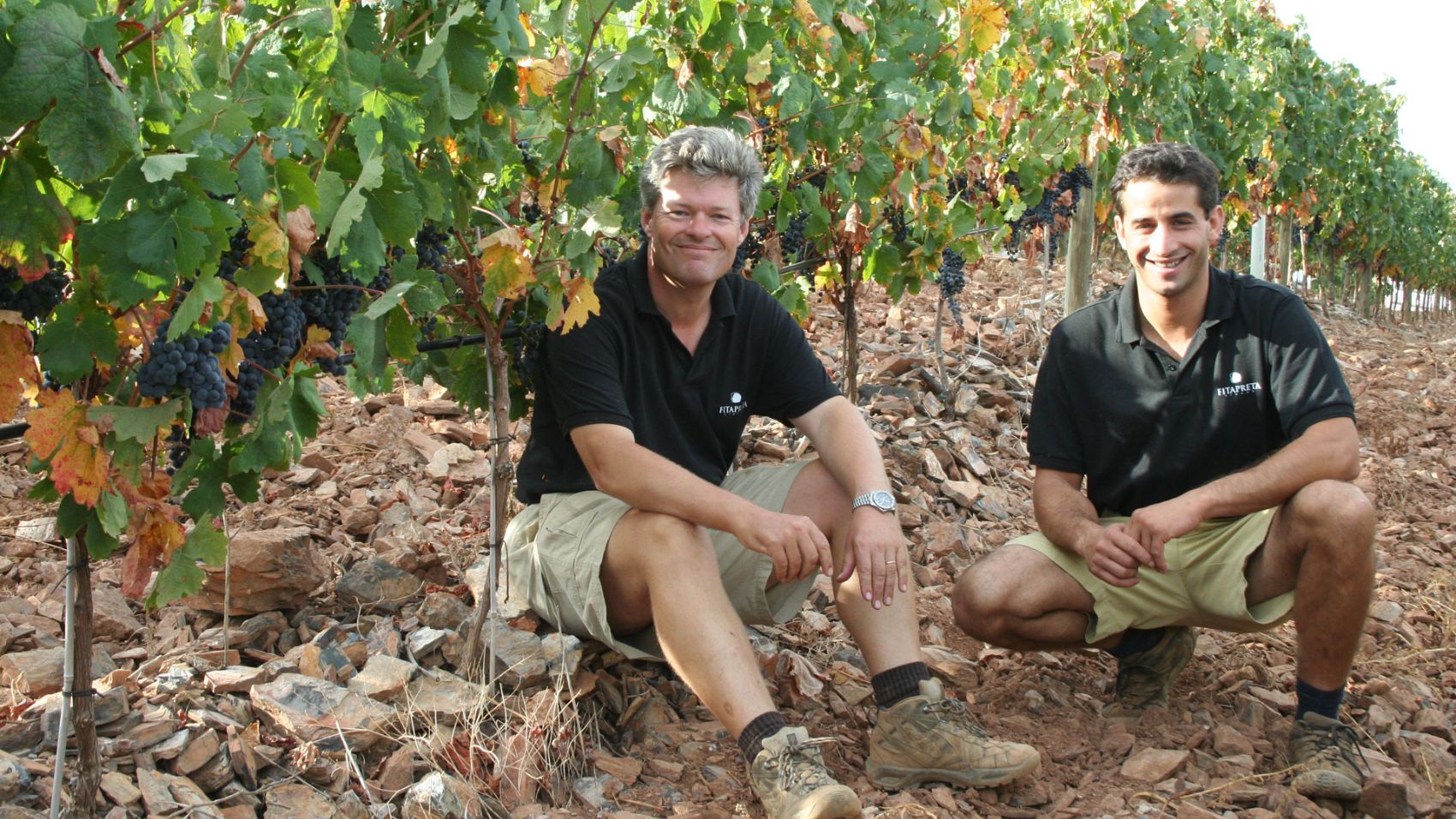 David Booth was a soldier, he was cavalry, he was infantry, he was dedicated to wildlife protection and demining. He was in love, he was a father, he was a friend, an early riser, a man of nature, of simple things, he was pure life. David Booth was also a vineyard man and our gardener. Above all, he was our friend.

Born in England, David Jeremy Booth was an Army officer for seven years, rising to the rank of Captain of the Green Jackets. He then studied Agriculture and Management at the Royal Agricultural College Cirencester, participated in demining in Mozambique and wildlife protection in Kenya. He studied viticulture at UC Davis in California, and became a disciple of Richard Smart in Portugal, where he introduced new trellising systems and brought a deep knowledge of viticulture that enabled him to convey complex concepts in a very simple way.

David Booth was also a vineyard consultant for several producers, such as:

As a guest speaker, David taught on the MBA course at his former school, the Royal Agricultural College Cirencester.

In 2004, he founded, together with António Maçanita, the Fitapreta project, to which he gave priority in his already busy professional life.

We, his friends and battle companions, miss his constant and contagious smile, his eternal optimism, his willingness to help, his ability to listen and his enjoyment of the simple things in life: fresh air, nature, time with his children, time with people, with pure life. We are sure that we will always honor and remember him, working each time harder, but with the same free and fresh spirit that he always transmitted. 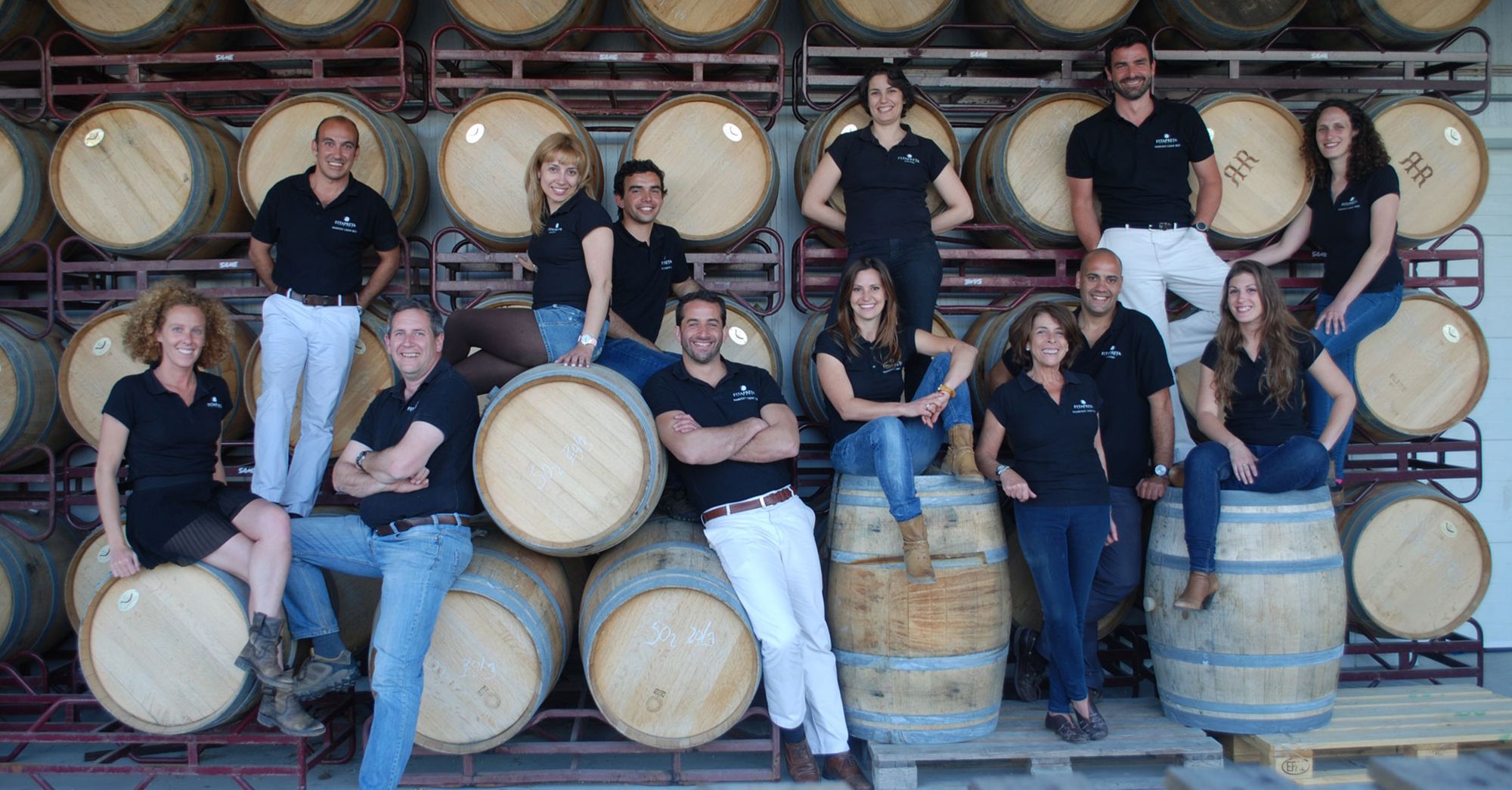 The winemaking team, based at the Fitapreta winery, in Paço do Morgado de Oliveira, in the district of Évora, consists of António Maçanita, Sandra Sárria, Andrés Herrera, Leonor Frazão and three other young and dynamic winemakers with experience in Portugal and abroad. This is also where a team dedicated to managing the warehouse and orders is based, as well as employees focused on the daily maintenance and building work on the estate.

Side by side with the winemakers, Alexandra Leroy Maçanita and Filipe Mateus coordinate the wine tourism and events team, which totals five people.

On the other side of the Tejo, based in the charming Tapada da Ajuda, in Lisbon, our sales team is coordinated by David Marques, who is directly supported in logistics by Mara Mendes, in management by Sara Horta and in Human Resources and Accounting by Mariana Minhoto.

Alongside our administrative and commercial team, we have five other people directly linked to the other companies in the group: Maçanita Vinhos, Azores Wine Company, Wine ID e a LM Events & Tourism.