Pico Island is the youngest of the nine islands of the Azores Archipelago and is also home to Portugal's highest point, Pico Mountain, a volcano 2351m above sea level which is the fourth highest volcano in the North Atlantic.

Pico Island belongs to the central group of the Azores archipelago and is the second largest island of the Azores.

The Landscape of the Pico Island Vineyard Culture was classified in 2004 as a World Heritage Site by UNESCO, reflecting the impressive human intervention on thousands of kilometres of vineyard walls lining the vineyard coast. One study estimates that by placing all the walls in a line, their length would correspond to two laps around the equator. 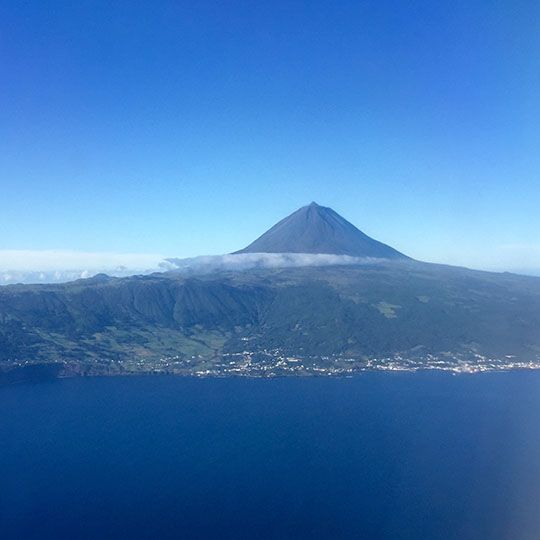 Pico island was discovered by Portuguese navigators along with other islands of the central group of the Azores Archipelago. There are three noteworthy dates, the first being 1432 as the reference date for the discovery of the Azores by Gonçalo o Velho Cabral, a squire of Infante Henrique, which marks the Portuguese presence in the territory; the second is the attribution in 1468 of the Captaincy of the island of Faial to a Flemish nobleman, Joss Van Hurtere; and finally, 1482, the date when the Pico island became part of the Captaincy of Horta.

The settlers came from mainland Portugal, Flanders and France as a result of an agreement made by Isabella of Portugal, Duchess of Burgundy, in an effort to populate these islands, creating a safe haven for nobles from Flanders at a time when the Duke of Burgundy was invading this territory.

The first wave of settlers is from 1465 establish themselves in Fayal with Joss Van Hurtere, which originates the De Utra and Dutra family and a second wave with Willem Van Der Haegan (Portuguese name Guilherme da Silveira) who travels through Fayal and ends up staying in São Jorge. Being all very close islands, São Jorge, Pico, and Fayal have a varied settlement history. The settlements in the central archipelago were initially made up of Portuguese, Flemish and French.

The Pico Volcano, or Pico Mountain, is a stratovolcano of similar typology to other known ones like Mount Etna, or Mount Teide. It is 2351 m above sea level and is the highest point in Portugal, marking the landscape of the island and the entire central archipelago.

Pico island is also geologically the youngest island of the Azores archipelago, formed 270,000 years ago, recent when compared with São Miguel island that is more than 5 million years old, or with Madeira and Tenerife that are more than 7 million years old.  This young geological age combined with recent eruptions and lava flows, the last being in 1718, shape the island with volcanic stone.

The basaltic bed-rock has not had the time to degrade and create soil.

These characteristics go against the agricultural trait of the other islands and made it the last island of the central group to be populated, only being populated from the 1480s onwards. These extreme poor soil conditions is what led the cultivation and production of high quality grapes used for making the wines that will ultimately bring fame and fortune to the island.

Despite the American revolution, which strengthened relations with France, at the end of the 18th Century the Russian Czars also gained a taste for it and started importing a significant part of the wines, which were a more concentrated and fortified version of the wines from Pico, with the industry continuing in all its splendour at the time.

Between 1852 and 1854 downy mildew and in 1872 to 1874 phylloxera plagues completely destroyed the Azores vineyards, with half of the population of Pico and Faial islands emigrating to the Americas.

Pico is the second largest island of the Azores, with an area of 444.9 km2 and an elongated shape, thanks to its 46.2 kilometres long and 15.8 kilometres wide maximum, 13,645 inhabitants, which represents less than 6% of the population of the Azores. It is situated at 38.40 latitude, 1700 km from the Portuguese coast, one third of the way along the Lisbon – Washington axis. The island is 6 km from neighbouring Faial and together with São Jorge make up what is called the "triangle islands".

The climate of the Azores Archipelago is essentially dictated by the geographical location of the islands in the context of the global atmospheric and oceanic circulation and by the influence of the water mass from which they emerge.

Generally speaking, its climate is characterised by its mildness in terms of temperature, high levels of air humidity, low irradiance rates, regular and abundant rainfall and a strong wind patterns that blow around the archipelago following the atmospheric circulation patterns in the North Atlantic basin.

The climate can be classified as humid mesothermal with oceanic characteristics

Pico mountain also has a significant impact on the island’s climate, since it's height, at 2351 metres, attracts the rain, keeping it away from the lower regions. This is known as the Foehn effect, when humid winds from the Atlantic Ocean crash into a mountain and are forced upwards, encountering lower and lower temperatures until they reach their dew points and become clouds.

It forms the distinctive ring or cap around the top of the Pico mountain, raining more than 5,000 mm per year on top of the mountain, but less than 1000 mm near the sea. That is why the locals say that the best vineyards are where you can hear the "singing of the crab", right by the sea, far away from the influence of the mountain. This is what makes Pico's terroir unique.

The combination of a cool climate, due to the latitude and Atlantic influence, with the Foehn effect forced Pico inhabitants to plant their vineyards right by the sea "where you can hear the singing of the crab" to guarantee a greater amount of sunshine and maturation.

By the sea there were the “lajidos” and the "biscoitos" (biscuits) named because they have small air pockets, both resulting from lava flows and sheer bed rock.

It was therefore necessary to arrange the stone and use it for protection from the sea and wind, and to make the most of the climatic and geological conditions of the stony land, the inhabitants of Picarote structured the land in an impressive mosaic of black dry stone walls called “currais”.

This grid of square plots outlined by basalt walls where the vines are planted extends to the horizon. Criação Velha and Santa Luzia are prime examples of this art of parcelling out the land, which corresponds to hundreds of kilometres of arduously erected stone walls. These lands, a mixture of volcanic activity and ancestral practices, encompass the Landscape of the Pico Island Vineyard Culture, which has been a UNESCO World Heritage Site since 2004.

While on the black volcanic floor the "rilheiras" stand out – furrows left by the wheels of the ox-carts that transported grapes and barrels – in the ports and harbours by the sea, it is the "rola-pipas", hillsides carved to facilitate the sliding of the barrels to the boats, which still today serve for this practice.